Awakening of National Maritime Culture and a Patriotic Vision on

The Restoration of Old Cities and Old Harbors's Local Wisdom,

As a Part of National Mental Revolution

We had been a maritime nation of a great maritime empire: the kingdom of Pajajaran, Sriwijaya, Majapahit, Samudra Pasai, Gowa Talau, Ternate and others in the pre-colonial era. How could this nation now change its maritime culture after more than 350 years of colonialism and independence?  It was a tragedy that this nation then turned away from maritime character inherited from the ancestors as sailors. This is the black box of national problems that we rarely realize. While other nations, not rooted in maritime culture and known as continental countries, even some almost have no beach though, build as a maritime country, such as Russia, America, Thailand, China, Korea, and others.

PATRIOTIC VISION ON RESTORING THE SOUL OF NUSANTARA CITY'S LOCAL WISDOM: A REVOLUTION IN THE CITY DEVELOPMENT

With the support of a holistic mental approcah by Krishnahari S. Pribadi, MD.

"We shape our buildings; thereafter they shape us"; "The farther back you can look, the farther forward you are likely to see" (Sir Winston Churchill)
"Young generation today do not realize how hard and difficult it was when Indonesian struggled to liberate themselves from three hundred years of Dutch colonialization. They have to learn thoroughly from our history and learn to feel the bitterness of the 300-year struggle for independence through the Indonesian Revolution of 1945-1949…..""They have to learn and follow the examples of the spirit of the older generations who had never given up or faded away. At the same time they could learn how our national identity is born throughout the struggle of the Nusantara's people within centuries. A nation that does not know his national identity would not know where to go in the future." (Ali Sadikin, An Interview With Magazine Express, June 1, 1973, and several times discussion with the author)
[Read more] 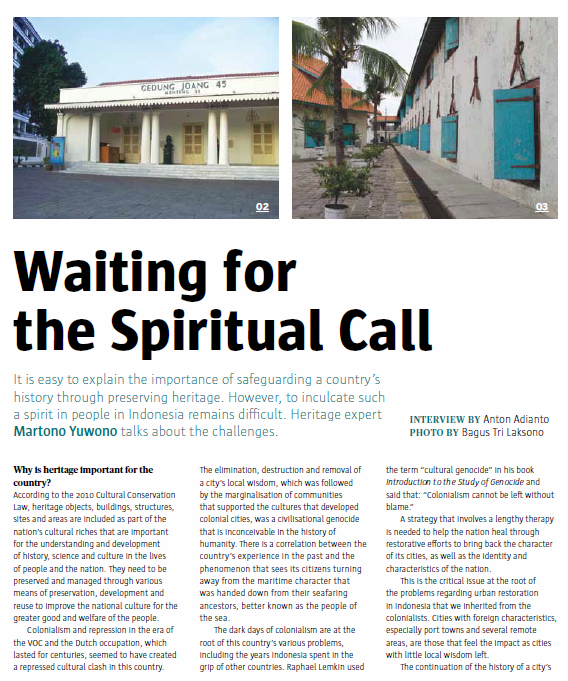 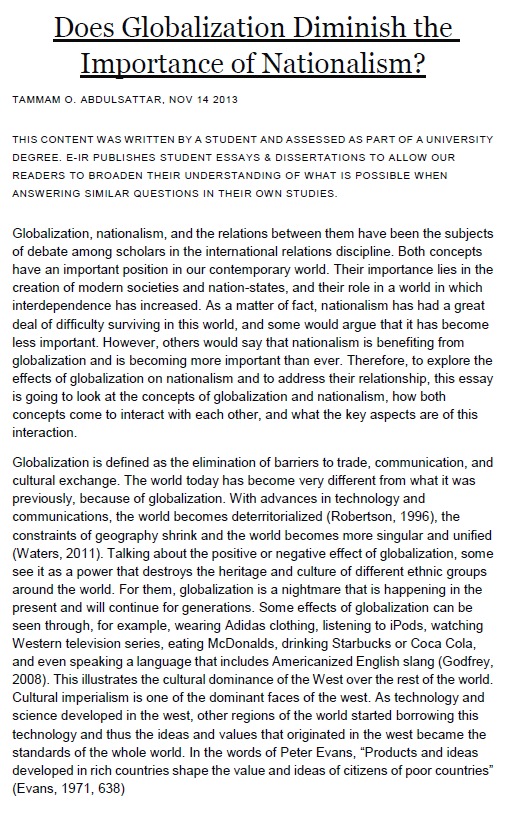 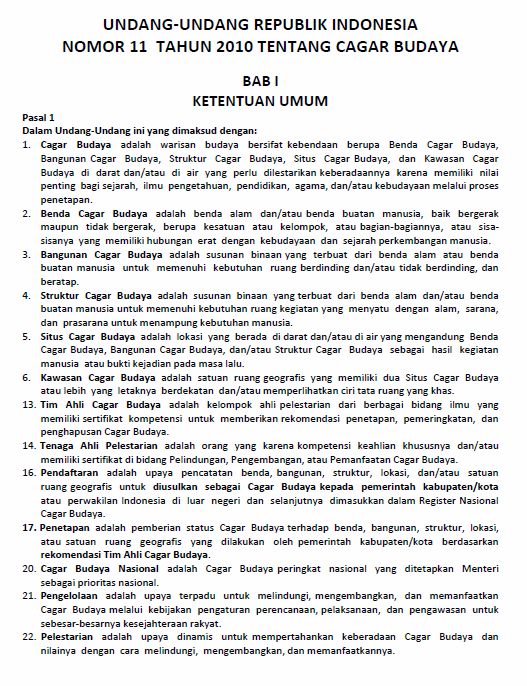 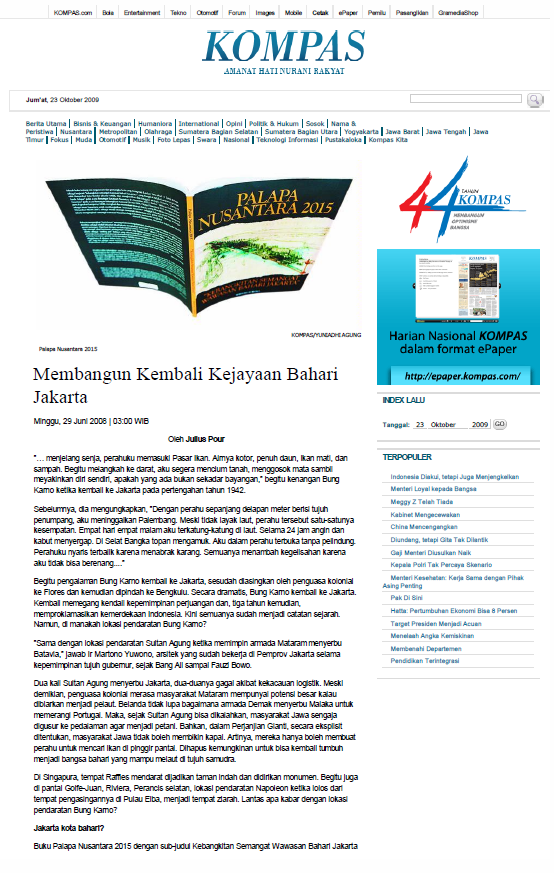 The first record of spices being used comes from the Assyrians (circa 3000 BCE). What is recorded is a myth that claims that the gods drank sesame wine on the night before they created the earth. Use of sesame as a flavouring is so ancient and widespread that it is difficult now to know the true origin of this spice. Though recent genetic evidence suggests that the plant originated near the Indian subcontinent. Thus the Assyrian myth represents our first historical evidence for an ancient spice trade.
[Read More, ...] 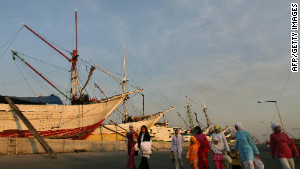 (CNN) -- Jakarta has always had a rich and fruitful relationship with the sea. A trade gateway linking east and west, the modern city can still show travelers glimpses of its long maritime history.
Now the Indonesian capital, it was initially settled as the port of Sunda Kelapa by the Hindu Kingdom of Sunda around the fifth century and was designed to develop a vibrant sea trade for the realm.
[Read More, ...] 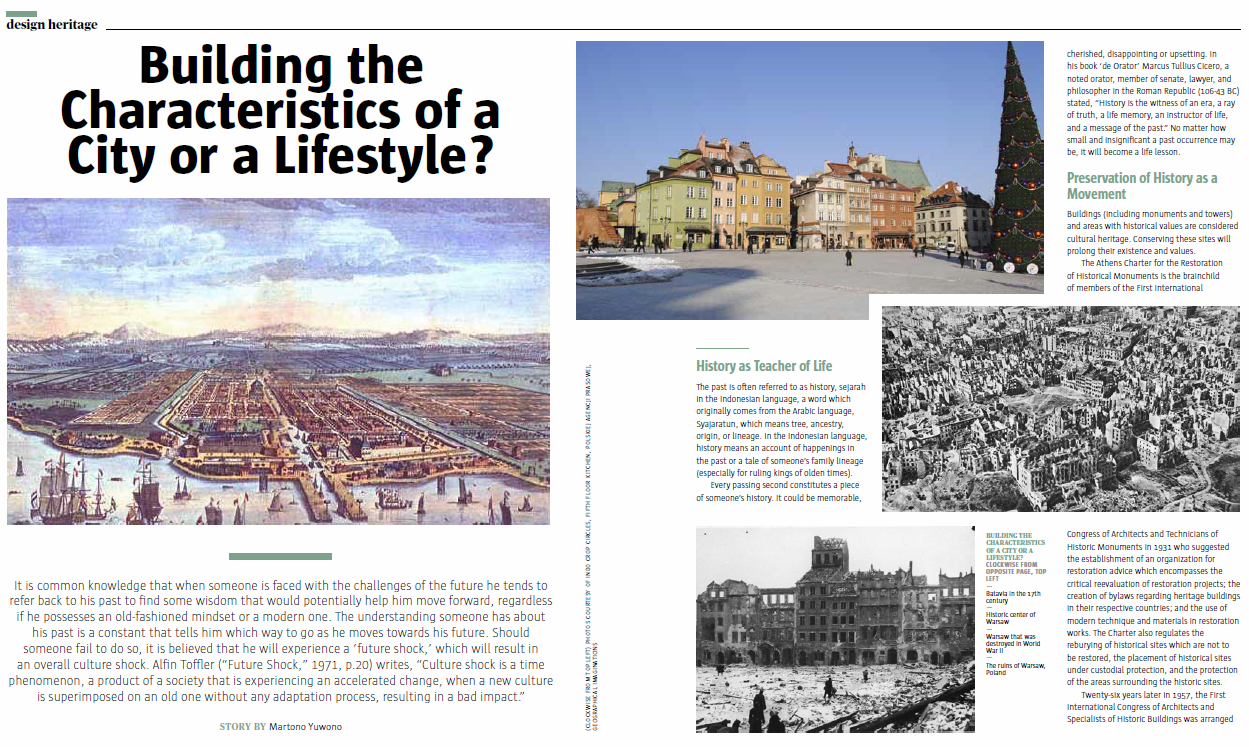 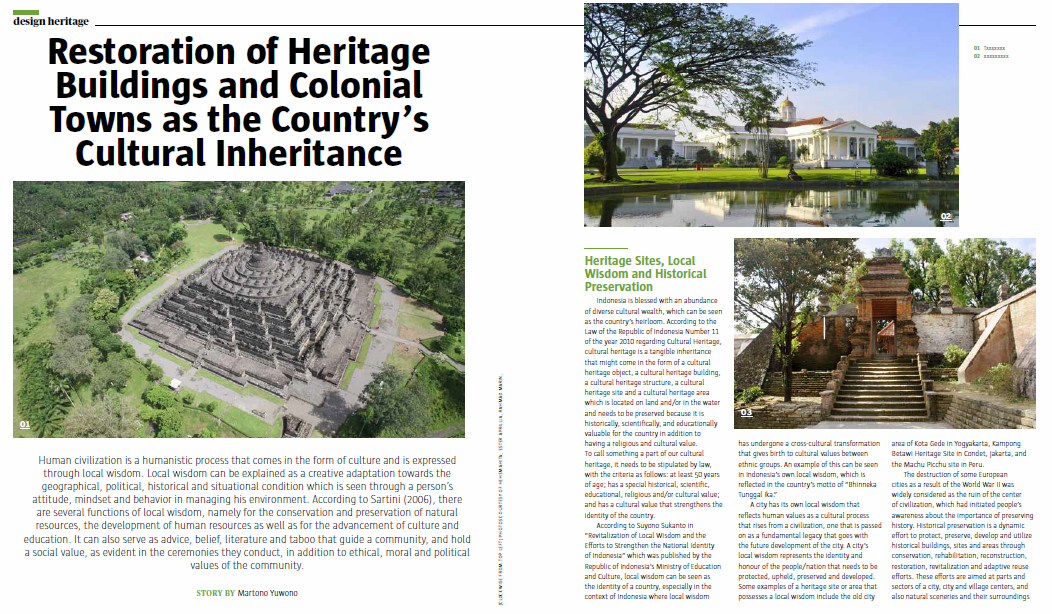 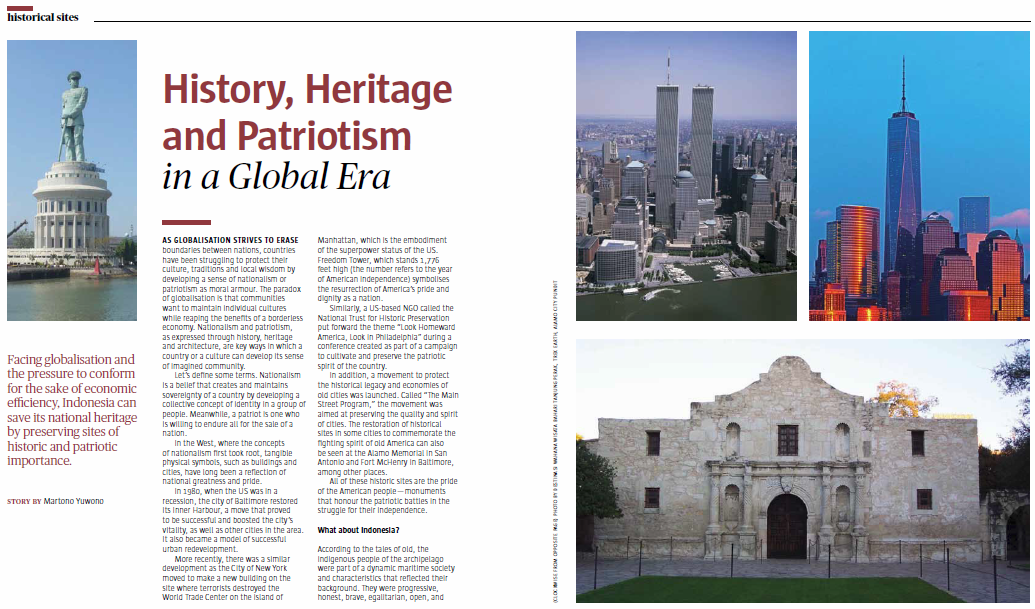 "We shape our buildings; thereafter they shape us" --- (Sir Winston Churchill).

"The young generation does not realize how hard and difficult it was when Indonesia struggled for our independence throughout three hundred years of colonization. They have to learn thoroughly from our history and to use the experiences and leadership of the older generations, as guidance and role models. They have to understand about our national identity. When they do not know their national's identity, where would they go?"

"Majapahit", a strong maritime nation in the 14th century

The history of Indonesia as a maritime nation dates back to the 14th century when this South East Asian region was subjected under the reign of the great "Majapahit" Empire.  The Empire ruled a region which is geographically located between two great continents namely Asia and Australia, and at the same time between two great oceans namely the Pacific and the Indian oceans. This region consisted of mainly the archipelagic group of islands (which is now referred to as Indonesia), and some portion of the coastal region at the south eastern tip of the Asian continent. "Majapahit" was already the largest archipelagic state in the world at that time, in control of the strategic cross roads (sea lanes) between those two great continents and two great oceans. The influence of "Majapahit" reached out as far as to the Middle East and East Africa. All of these signify that "Majapahit" was then already a leading maritime nation. As the main body of the Empire, Indonesia which is an archipelago is consequently an archipelagic state. Nearly two third of this archipelago is made up of sea and the rest are numerous islands. The archipelagic country was also called "Nusantara", a term taken from an oath by  Gajah Mada in 1336, the prime minister of Majapahit, a strong Javanese maritime kingdom, who then vowed  to unite Nusantara. The term Nusantara was written in the old Javanese manuscripts called  Pararaton and Negarakertagama. The synonym to Nusantara in Sanskrit means "island" to describe the Southeast Asian Archipelago. Hence, "Nusantara" is a synonym of "Indonesia".

Our whole cultural heritage is a product of the contributions of all peoples. We can best understand this if we realize how impoverished our culture would be if the so-called inferior peoples doomed by Germany, such as the Jews, had not been permitted to create the Bible or to give birth to an Einstein, a Spinosa; if the Poles had not had the opportunity to give to the world a Copernicus, a Chopin, a Curie, the Czechs a Huss, and a Dvorak; the Greeks a Plato and a Socrates; the Russians, a Tolstoy and a Shostakovich.
(Raphaël Lemkin, "Genocide – A Modern Crime")2

… colonialism cannot be left without blame.
(Raphaël Lemkin, "Introduction to the Study of Genocide") 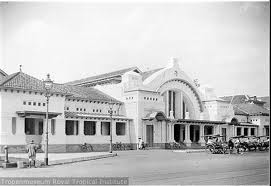 Jakarta : originated from a small port at the mouth of the Ciliwung River about 500 years ago. For centuries this port city later developed into a bustling center of international trade. Initial knowledge about Jakarta raised slightly through the various inscriptions found in the area of ​​the airport.Description of the city until the arrival of the early European explorers could say very little.
European authors report the 16th century mentions a city called Kalapa, which seems to be the main airport / city center for a Hindu kingdom called Sunda, Padjadjaran its capital, located about 40 kilometers inland, close to the town of Bogor now. The Portuguese is the biggest party of the first Europeans to come to the airport Kalapa. The city was then attacked by a youth leader, named Fatahillah, from a neighboring kingdom with Kalapa. Fatahillah to rename Sunda Kalapa Jayakarta on June 22, 1527. This date is now celebrated as the birth of the city. The Dutch came in the late 16th century and then master the Jayakarta. 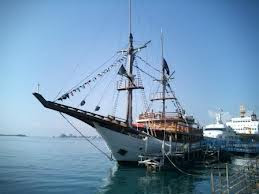 Boat Pinisi : traditional sailing ship is a native of Indonesia , precisely derived from Bugis from Sulawesi city of Makassar in the south of the village of Bira district precisely Bonto Bulukumba Bahari . Pinisi actually a screen name . These ships generally have two main masts and seven screens , three on the front end , two in front and two behind ; generally used for the transport of goods between islands . The two main masts by 2 Shahada and seven different pieces of the screen is the number of surah Al - Fatihah . Pinisi is a ship that uses a type of display screen schooner with two poles with seven strands of the screen and also has a meaning that the ancestors of the Indonesian nation capable mengharungi seven great oceans of the world. Pinisi timber ship has been used in Indonesia since a few centuries ago , is expected to ship phinisi existed before the 1500s . The legend says that in the 14th century , first made by Pinisi Sawerigading , Crown Royal Luwu to sail to China had wanted to woo Princess of China ( Chinna ) who named We Cuday. 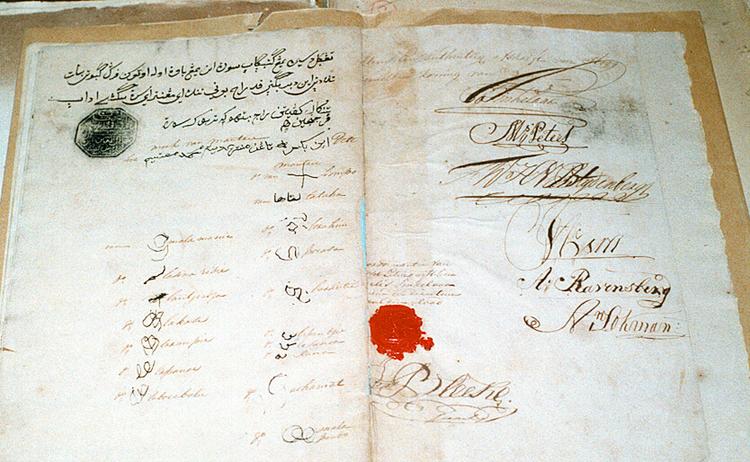 The VOC (Verenigde Oost-Indische Compagnie) was a Dutch trading company founded by traders and burghersfrom port towns such as Amsterdam, Rotterdam, and Middelburg. It was the largest and most impressive of the early modern European trading companies operating in Asia. It formed in 1602 when the States-General of the United Provinces, the highest authority of the Republic of the Netherlands, persuaded several competing Dutch spice-trading firms to incorporate into a single trading company. It had the States-General's authority in the trade zone between South Africa and Japan to conduct trade, erect fortifications, appoint governors, keep a standing army, and conclude treaties in its name.

Dr Thomas Crump moved to Amsterdam in 1972 to take up an appointment in the University's Social Sciences Faculty, which occupies the original corporate headquarters of the VOC - the Dutch East Indies Company. His interest in the VOC goes back to 1980, when he set up a research project in Japan, where, for a period of more than 200 years, starting in the mid-17th century, the Company enjoyed a complete monolopy of foreign trade granted by the ruling shoguns. This was a extension of its successful exploitation of the wealth of the East Indies during the 16th and 17th centuries.

(A series of two lectures.) 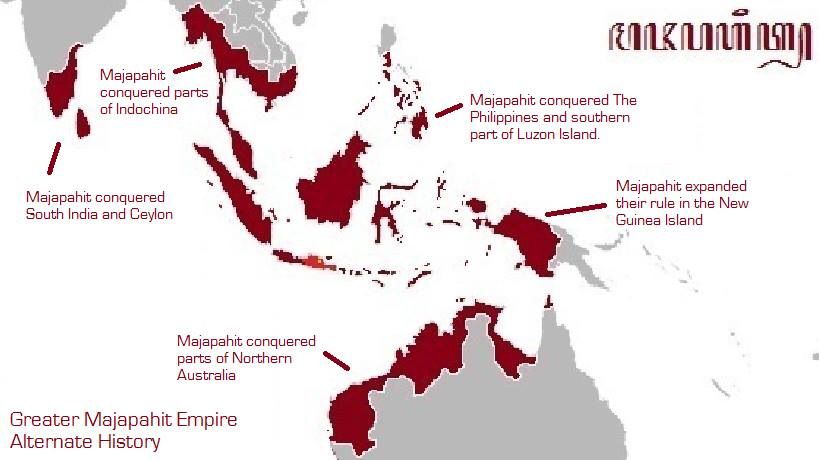 The Majapahit Kingdom (1293-1520) was perhaps the greatest of the early Indonesian kingdoms. It was founded in 1294 in East Java by Wijaya, who defeated the invading Mongols. Under the ruler Hayam Wuruk (1350-89) and the military leader Gajah Mada, it expanded across Java and gained control over much of present-day Indonesia—large parts of Java, Sumatra, Sulawesi, Borneo, Lombok, Malaku, Sumbawa, Timor and other scattered islands—as well as the Malay peninsula through military might. Places of commericial value such as ports were targeted and the wealth gained from trade enriched the empire. The name Majapahit stems from the two words maja, meaning a type of fruit, and pahit, which is the Indonesian word for 'bitter'.

An Indianized kingdom, Majapahit was the last of the major Hindu empires of the Malay archipelago and is considered one of the greatest states in Indonesian history. Its influence extended over much of modern-day Indonesia and Malaysia though the extent of its influence is the subject of debate. Based in eastern Java from 1293 to around 1500, its greatest ruler was Hayam Wuruk, whose reign from 1350 to 1389 marked the empire's peak when it dominated kingdoms in Maritime Southeast Asia (present day Indonesia, Malaysia, and the Philippines). [Source: Wikipedia]

The Majapahit Kingdom Empire was centered at Trowulan near the present-day city Surubaya in East Java. Some look upon Majapahit period as a Golden Age of Indonesian history. Local wealth came from extensive wet rice cultivation and international wealth came from the spice trade. Trading relations were established with Cambodia, Siam, Burma and Vietnam. The The Majapahits had a somewhat stormy relationship with China which was under Mongol rule.

Hinduism fused with Buddhism were the primary religions. Islam was tolerated and there is evidence that Muslims worked within the court. Javanese kings rules in accordance with wahyu, the belief that some people had a divine mandate to rule. People believed if a king misruled the people had to go down with him. After Hayam Wuruk's death the Majapahit Kingdom began to decline. It collapsed in 1478 when Trowulan was sacked by Denmark and the Majapahit rulers fled to Bali (See Bali), opening the way to Muslim conquest of Java.

Majapahit flourished at the end of what is known as Indonesia's "classical age". This was a period in which the religions of Hinduism and Buddhism were predominant cultural influences. Beginning with the first appearance of Indianised kingdoms in the Malay Archipelago in the A.D. 5th century, this classical age was to last for more than a millennium, until the final collapse of Majapahit in the late 15th century and the establishing of Java's first Islamic sultanate at Demak. [Source: ancientworlds.net]